The History of LCD Displays and What the Future Holds

Here at Phoenix Display, we talk about LCD displays every day. With LCDs being such a big part of our daily lives, we thought it would be useful to explore the history of this important technology and where we see it going in the future.

1880s. Surprisingly, LCD technology dates back to the late 19th century. In 1888, liquid crystal material was discovered in Austria by chemist Friedrich Reinitzer, which was about a decade before the cathode-ray tube (CRT) was invented.

1970s. Fast forward nearly 100 years and we have the first industry applications of liquid crystals. In 1970, Hoffman-LaRoche filed for a patent in Switzerland for the twisted nematic (TN) field effect in liquid crystals. The company then licensed the technology to the Swiss manufacturer Brown, Boveri & Cie (BBC), which produced TN displays for wristwatches and other applications.

In 1973, Sharp Corporation made use of LCD displays in calculators. Shortly after, the company followed BBC’s lead and mass produced TN LCD displays for watches in 1975.

1980s. After wristwatches came televisions (TVs), with the first color LCD TVs being developed as handheld TVs in Japan. In 1982, Seiko Epson released the first LCD TV, the Epson TV Watch, a wristwatch equipped with a small active-matrix LCD TV.

1990s. The 90s gave way to technology acceleration in the LCD space. Through multiple breakthroughs, researchers and inventors were able to improve contrast and viewing angles, as well as bring costs down.

2000s. After 30+ years of competition, LCD technology surpassed longstanding CRTs. Namely, in 2007, LCD TVs could claim better image quality than CRT-based TVs. Subsequently, in the fourth quarter of 2007, worldwide sales of LCD TVs were higher than that of CRT TVs for the first time ever. 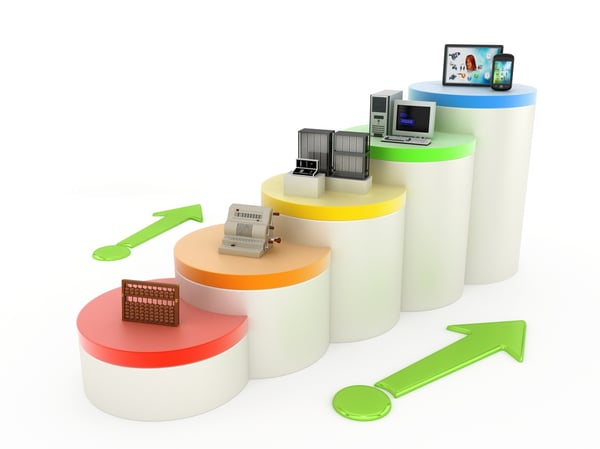 How Do LCD Displays Work?

Next, let’s take a brief look at how the technology works. Essentially, the LCD glass is just a light valve whose sole purpose is to either block light or allow light to go through it. We go into greater details in our post, “The Anatomy of LCD Displays,” but here’s the gist:

It accomplishes this simple task through the liquid crystal fluid, which is a fluid that’s rotated in a steady natural state between two pieces of glass. This rotation, when combined with front and rear polarizers, allows the light to be either transmitted through the glass or blocked. This light blocking state is changed when a voltage is applied to LC fluid which stops the light’s rotation.

What’s Happening with LCD Displays Over the Next 10 Years?

Finally, let’s look at the LCD display landscape in the near future. There’s three big areas that are being explored with LCD displays: Flexible displays, 3D displays, and reel-to-reel manufacturing.

Flexible Displays. Even now, you’re probably hearing buzz about flexible displays, which are bendable displays that are virtually shatterproof and unbreakable.

Development has been moving forward with these displays in both military and industry. Funding by the military makes sense given that flexible displays won’t break like traditional displays, providing for numerous field applications that require a more durable display.

In addition, there are plenty of industrial applications that would benefit from flexible displays, such as products that could use displays that wrap around objects.

3D Displays. With 3D being such a popular technology, it’s no surprise there’s activity in this space. These displays are capable of conveying depth perception to viewers, which provides for a more realistic user experience.

Specifically, 3D displays with passive glasses (or no glasses) remove the requirement for syncing up with more expensive, active, shutter-based glasses. Naturally, this will lead to cost savings.

Reel-to-Reel Manufacturing. Current manufacturing processes only allow for building one glass panel at a time. Even with great efficiencies, this process is limiting.

In contrast, reel-to-reel manufacturing enables the continuous building of glass panels. This will represent a dramatic reduction in costs, which can be passed along to the customer and allow for more competitive pricing.

Need a new supplier that understands your unique display needs and can produce custom displays that address them? Let us help. Contact us.