Can I Put a Touch Panel on Any Display?

It wasn’t long ago that touch panel capabilities seemed like a futuristic novelty more suited to science fiction than the real world. With advent of resistive and capacitive touch panel technology and the plethora of smartphones, more and more consumers expect every LCD display to incorporate touch panel functionality.The applications of a touch panel are endless—allowing users to directly touch and adjust data on a product with their hands is a tactile, intuitive experience that streamlines the human-machine interface.
How difficult is it to have a touch panel added to a typical display? Can your display provider incorporate a touch 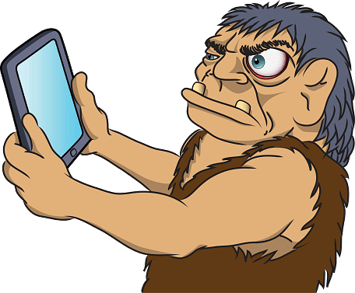 panel on any display?

The short answer is yes. Just about any display can be fitted to function with a touch panel. In order to understand why and how this process works, it’s important to learn a bit about how touch panels function.

How a Display with a Touch Panel Works

A touch panel display system is actually made up of two major independent systems. First is the display itself, where information and content is visible for end users. Second, the touch panel system is a separate device laminated to the front of the display, with its sole function to detect touch and gestures. 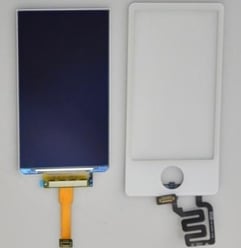 These two components are seamlessly linked together through the magic of the system’s software, but are two totally separate systems. When a touch in a specific area is detected, it’s up to the software to change if or how the display reacts. This is based on the graphic use interface design and the product-specific custom functions. It works so well, that often consumers don’t realize that the display is just displaying content and the touch panel is simply registering touch..

There are two main types of touch panels used today on small format displays: Resistive and Capacitive. Each has its own unique design and advantages or disadvantages.

First on the market were resistive touch panels which typically use a conductive glass backplane with a plastic conductive coated top surface that are evenly separated. A finger or stylus pressure causes internal electrical contact between the two surfaces at the point of touch, which supplies the touch screen controller with a vertical and horizontal analog voltage change for digitization of the exact touch location. There are a few variants on this technology with include a flexible Film-Film touch panel construction as well as a more scratch resistant Glass-Film-Glass which uses a thin glass hard coat to protect the outermost touch surface. 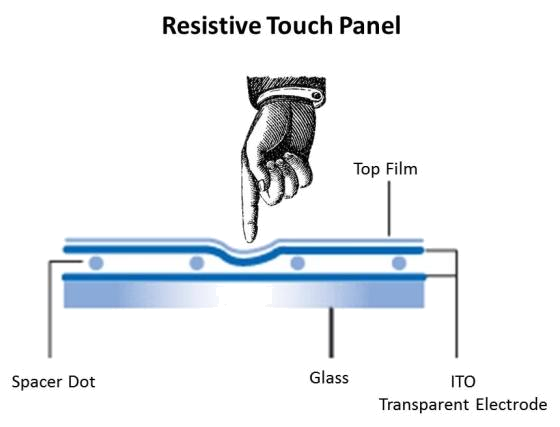 Then came capacitive touch panel technology, which is used in modern smartphones, tablets, laptops and white goods. Projected capacitive (PCAP) touch panels are the most common capacitive touch technology used in small format displays. PCAP touch panels are made up of a matrix of rows and columns of ITO (Indium Tin Oxide) conductive material, layered on sheets of glass to form a grid. Voltage applied to this grid creates a uniform electrostatic field, which can be measured. When a conductive object comes into contact with the capacitive touch panel, the local electrostatic field is distorted at that point resulting in a measurable change in capacitance. Additionally, if a finger or conductive stylus bridges the gap between two of the conductive grids, the field is interrupted and also detected by the controller. The capacitance is measured at every individual point on the grid to accurately track touches or gestures.

Both the resistive and the capacitive touch panel designs require a touch panel controller to be either part of the LCD display system or part the end product itself. 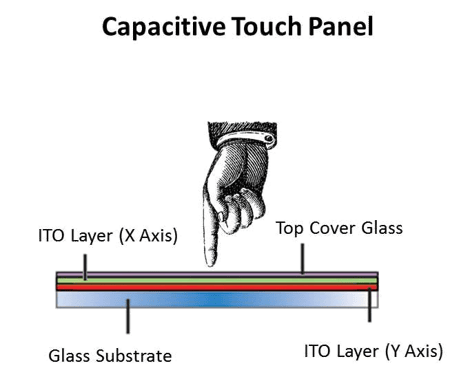 How to Choose Between Resistive & Capacitive

The Power of Touch

Adding touch panel functionality to your display can dramatically increase its capability to communicate and receive data, making the user experience more intuitive and more productive. While certain applications make touch panels unnecessary or unusable (i.e., extremely small or large panels, hanging displays that are out of reach, etc.), most common applications could benefit from the addition of touch capabilities.

Are you ready to discover how the power of touch can transform the effectiveness of your displays? Find out how to integrate this functionality with your current product line. Contact us today.